Free Standard Shipping Is Back!

Today started almost identical to every other day, however today I felt a bit more inspired. I decided to do something to reflect my internal gender fluid self. I started by applying some Deep Pink Blush Eyeshadow. This is extreme for me normally I wouldn’t dare do this due to the negative stigma attached to a 19-year-old male wearing makeup. For a split second I was going to remove it, but then I remembered this is the "Real Me” and one day we will all die and the last thing I want to carry with me is the judgment from others who are just as inexperienced at life as me. So in protest of what I find beautiful, I also added a pair of DBE Dangle Earrings and I continued to work.

While folding clothes at work, I was approached by a middle-aged male customer. He was friendly and told me witty yet corny dad jokes which I found amusing. I was surprised he was so friendly and found myself feeling quite suspect of his intentions based on the way he gave me periodic side glares. However, my good mood and undying support of a better more accepting humanity calmed my nerves and I just enjoyed the interaction. As we closed our friendly conversation the customer said, “You should try visiting a church soon, I'm sure they'll be happy to see you”.

At that very moment, those slight side glares made perfect sense. Clearly, he felt that I was some sort of anomaly in need of repair. This would happen to me on a day when I’m feeling positively inspired to be the “Real Me”. Shocked by his statement I found myself in a downward catalyst trying to reconstruct our conversation to find the anomaly in the situation that would lead him to suggest church to me. Then I remembered the side glares and realized the problem was my makeup, my earrings, ME!

What comes to mind when you think of men wearing feminine items? Makeup, heels, skirts, jewelry, wigs and etc, an iconic lineup of products that current society perceives to be the ultimate epitome of today’s feminine culture. If you’re still reading lets for the sake of humanity cut any potential hate and just look at facts. All the items mentioned were originally intended for Men if not both Genders. Let's get into it.

Ways Of Jewelry Use In Men During Ancient Egypt and in Ancient Pirates:

" The first reliable data about jewelry worn in the ears dates back to 7th millennium BC. Mentions about earrings can be found on clay tablets from Assyria and on papyri of Ancient Egypt. In these states, men's earrings showed the high social status of a person". A similar comparison of use, you'll find that was done with heels.

Also With Pirates, successful from the 1500s to 1830s. They believed "Earrings were also worn for superstitious reasons. Some pirates were convinced that wearing an earring would improve or even cure bad eyesight, as they believed that the precious metals in an earring possessed magical healing powers. Another tale was that pierced ears would prevent seasickness. Others believed that a gold earring served as a protective talisman and that a man wearing an earring wouldn't drown."

Just From these few artifacts, you can tell that earrings have played an impactful part to men of the past, as they will the future.

Some Makeup Uses For Men Through Out History : 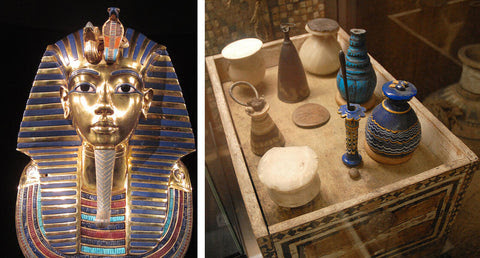 Partial Makeup Uses And Beliefs For Men During Ancient Egypt

The known history of makeup comes in as early as 4000 BCE where Egyptian men and women used black Kohl for eyeliner and believed wearing certain eye shadow colors could evoke gods for practical and ritualistic purposes, and also eye decoration protected them from the troubles of “Evil Eye”.

Makeup Use For People in 17th - 18th Century Europe

"For centuries, the fashionable skin colour in Europe was palest white as it suggested wealth and idleness, rather than having to labour in the fields and get sunburnt. This pale look became even more pronounced in the 17th and 18th centuries as fashionable men and women increasingly resorted to artifice to make their complexion yet whiter." Wrote Caecilia Dance.

Heels Wear Known Origination and Uses of The 15th Century:

Standing Tall: The Curious History of Men in Heels marks the 20th anniversary of the Bata Shoe Museum. From top left, clockwise: A Persian men's shoe, a John Lennon boot, a 17th-century young gentleman's shoe, another heeled boot from the exhibit and an Elton John platform. By Karen Von Hahn. To the furthest left is Louis XIV.

Heels have known history originating from Persian men. Where they were originally created for horse riding so that soldiers could have better stances in Stirrups while aiming their bow and arrows. By The Way, this information can be dated back all the way to the 10th Century.

Then around the 17th century, they became a "Masculine" statement for wealthy. Basically, a symbolization showcasing the male position in society. For Example, Louis XIV.  if you had on heels in the 15th century and you were a man? You pretty much were that b!t@h; you had power!

Why Is This Important:

I hope this blog can have a slight influence on negative impressions circulating gender fluidity through personal appearance, and also that a lot of things that are considered so unaccepted, truly aren't that bad. Especially knowing they come from a past completely different from today's, but yet so similar. So with that being said. All of us especially those of the LGBTQIA and others demanding gender fluidity in a society where self-expression through appearance isn't the normal status quo. Let's all use this as hope to let us know that the impact of staying true to our self can change everything for the better and the beautiful future that we so rightly deserves is never too far away!

Jewelry: Bikerringshop - "The History Of Mens Earring In A NutShell" https://www.bikerringshop.com/blogs/news/the-history-of-mens-earrings-in-a-nutshell,

Her Neck Was Green And No Envy was Involved

Shhhhhh These Are Fake Diamonds